Join us at the Duke for the revival of this ancient tradition.

Wassail is an ale-based drink seasoned with spices and honey. It was served from huge bowls, often made of silver or pewter. The Wassail bowl would be passed around with the greeting, ‘Wassail’.

Wassail gets its name from the Old English term “waes hael“, meaning “be well”. It was a Saxon custom that, at the start of each year, the lord of the manor would shout ‘waes hael’. The assembled crowd would reply ‘drinc hael‘, meaning ‘drink and be healthy’.

Associated with Christmas and the festive season, wassailing traditionally occurred on Jan 6th, or Old Twelfth Night Jan 17th. The origins of this rite most probably pre-date Christianity and were conducted to ensure a good crop in the coming year.

Our event will feature: Wassailing of the Apple Tree, Traditional Music & Song in homage to our drinking hall rituals. We will also be providing mulled cider and spiced ale. More details to follow … 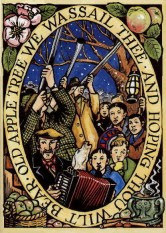 Here’s a typical recitation to bless the apple trees.

The Apple trees were sprinkled with wassail to ensure a good crop. Villagers would gather around the apple trees with shotguns in later years, or pots and pans and made a tremendous racket to raise the Sleeping Tree Spirit and to scare off demons.

This custom was especially important during a time when part of a labourer’s wages was paid in apple cider. Landlords needed a good apple crop to attract good workers. Wassailing was meant to keep the tree safe from evil spirits until the next year’s apples appeared. 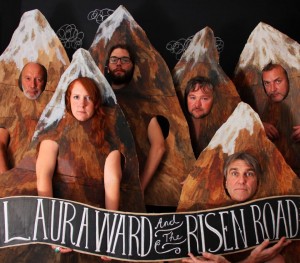 Join us for the post-Wassail ceremony party …

Home-grown talent abounds. Already a local legend and regular on the Sussex music circuit, Shoreham based Laura Ward and members of her band, The Risen Road, perform a set of original roots tunes plus new and vivid interpretations of songs from the traditional canon. Drawing on nu-folk, bluegrass, Irish and contemporary sources, Laura Ward and songwriter Matt Szul’s music celebrates and reinvents the legacy of the troubadour.